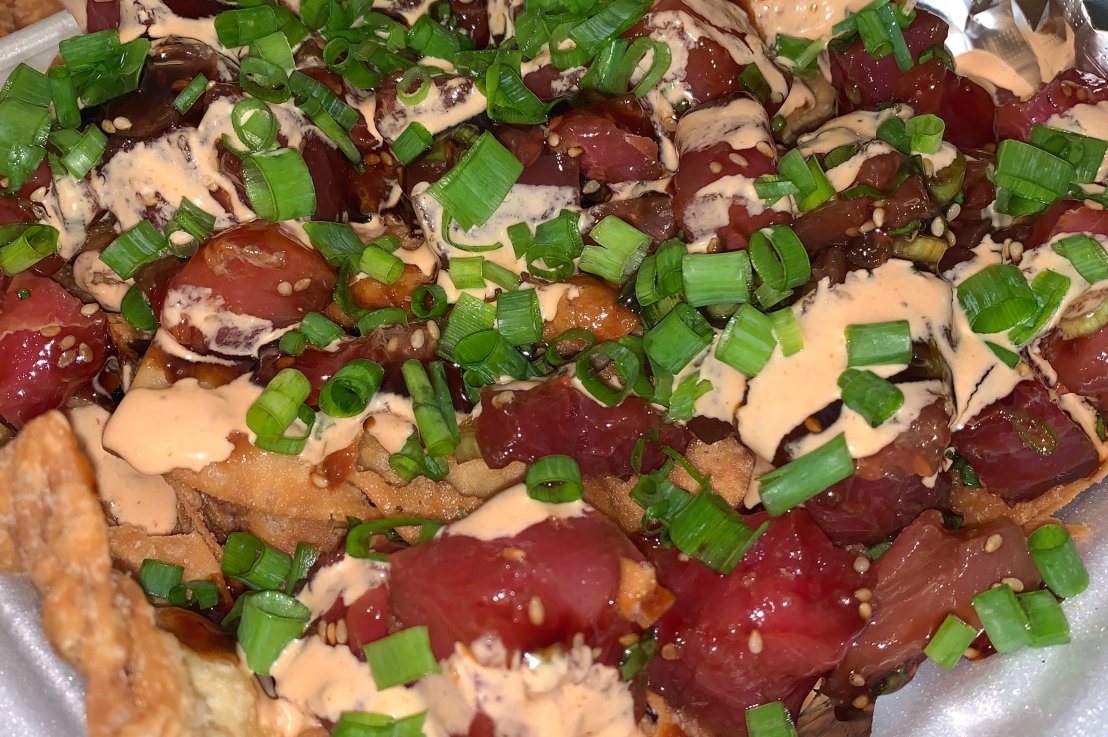 Hawaii is a melting pot of different cultures, so it’s no wonder why this list is so extensive. While not everything here is my favorite thing to eat, I’d still recommend trying it if you ever get the chance to visit the island. When in Hawaii, right?

Soft-serve pineapple ice-cream. More popular at Aloha Isle at Disney World than it is in Hawaii, you should still check out the Dole Plantation and grab yourself a cup. Though pineapples are originally from Brazil, they do thrive in Hawaii. Therefore, they can be picked at the perfect ripeness, making them sweeter than the ones that are picked when they aren’t so ripe, and then imported to mainland USA

There’s more to seafood in Hawaii than poke. Aside from the obvious reason that their seafood is super fresh, you’ll also find varieties that you won’t find anywhere else

Fried and crispy chicken (usually boneless thigh) with lots of garlic, this is a popular item for plate lunches

A sweet, coconut dessert that has the consistency of custard, or Jell-O

‘Kalua’ literally means to cook in an underground oven. Just like lau lau, Kalua pigs are traditionally prepared in imus. The difference is that the Kalua pig is typically the entire pig and is very popular at luaus

The vendors rotate but the one who has been there consistently is Big Island Abalone and I can see why. They grill the abalones fresh and it is so unbelievably tender. Just make sure to go early because once they sell out, they’re done for the day

Specifically the coffee rum. Ben and I went on the Koloa Rum tour on Kauai in 2018 and ever since then, we fell in love with their coffee rum – and he doesn’t even drink coffee! It’s sweet, smooth with a strong coffee flavor. Every time we go to Hawaii, we make sure to pick up a bottle from Walmart to bring back home

Sure you’ll find these on the mainland but they’re not as abundant as they are in Hawaii. My favorites are the Longboard Island Lager (classic) and the Koko Brown Nut Brown Ale. Both are light and refreshing and are the perfect day to wind down from a day lying on the beach 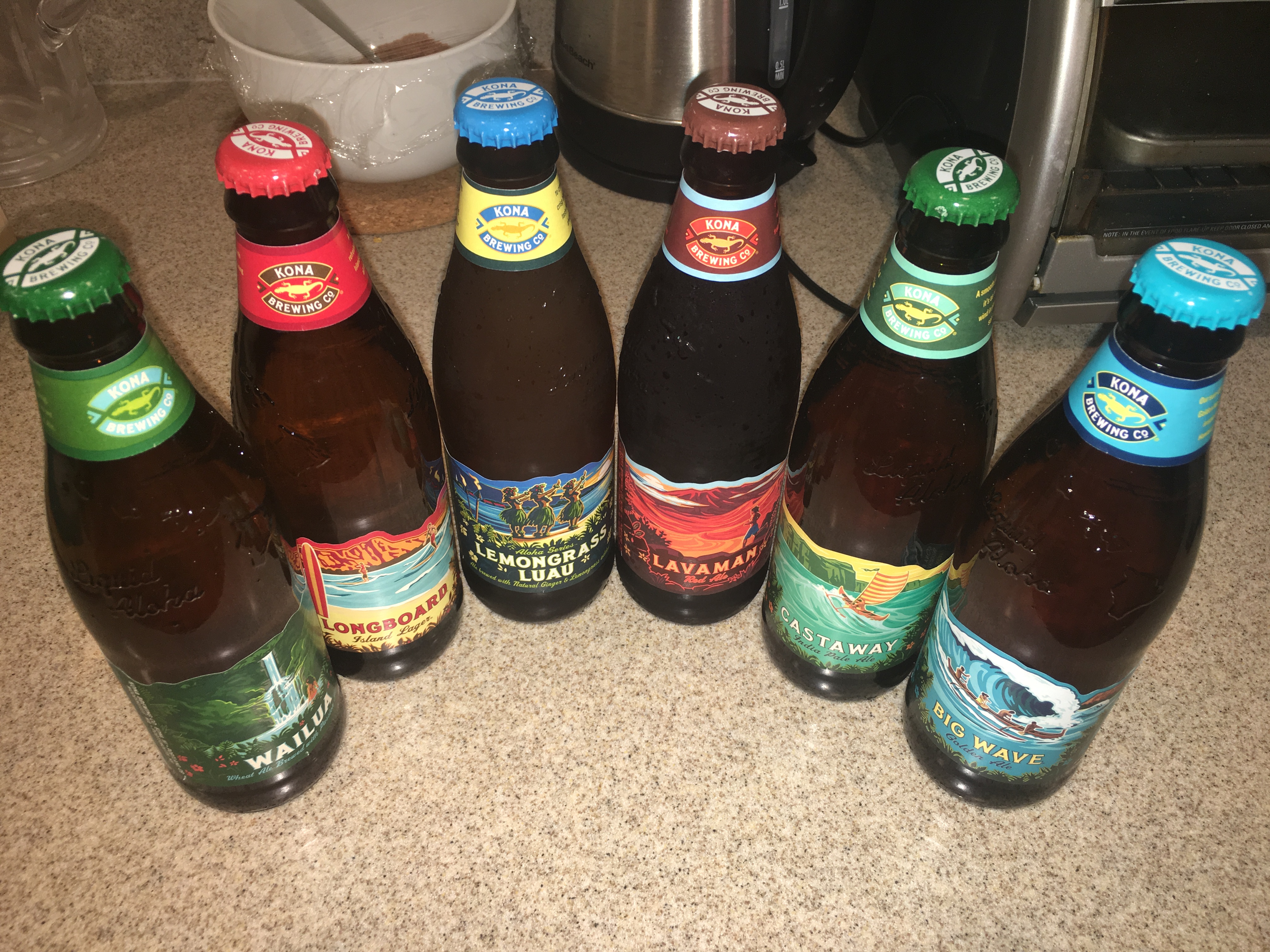 White rice, topped with a hamburger patty, then a fried egg, then some gravy. You’ll find this at any Hawaiian diner you step into. There are many variations of this but the hamburger patty is the original

Diced salted salmon with diced tomatoes, and sometimes dices onions and cucumbers – typically served at luaus as a side dish. I’m not a huge fan but this is mainly due to the fact that I don’t really like cured salmon (except when served with cream cheese on a bagel)

First introduced to Hawaii back in 1878 by Portuguese plantation workers, these are deep-fried doughnuts, coated in granulated sugar

Steamed bun with roast pork inside; basically a different variation of a char siu bao

Fresh udon, made to order and the best part is that you get to watch the make it. The curry nikutama is a must. Fresh, soft udon noodles swimming in a creamy curry broth

Basically a block of rice and a slice of spam, wrapped with a piece of nori dried seaweed. It’s a great snack for the beach

Since Hawaii is so close to Japan, you’re bound to get some really interesting pieces. During my latest visit (July 2021), I didn’t make reservations so I didn’t get to try the omakase place I originally wanted to try. However, I did get to try Sushi Murayama and my favorite pieces were the wagyu musubi, chu toro/o-toro/uni, and the monkfish liver

Salted, dried beef similar to beef jerky. I tried one from Foodland and it was super tough and hard to chew

Two scoops of white rice, a scoop of macaroni salad, and an entree. This could be any type of meat, whether it’s spam, a beef patty, or some chicken. Back in 1880s, this became popular amongst plantation workers because they ate whatever leftover rice/meats from the previous night’s dinner for lunch. Today, it’s still an inexpensive way to fill up

A super, sugary drink consisting of Passionfruit, Orange, and Guava juices. Hawaiian Sun is a popular brand, and if you find yourself on a Hawaiian Airlines flight, you’ll find it as one of the available refreshments

This is made from the underground part of the taro plant, which is cooked and then mashed. The consistency is pasty and the taste was flavorless (in my opinion). Maybe it needed some sugar?

MUCH better than actual poi. The flavor is light and the donuts are fluffy like a pillow

Marinated, raw fish salad, usually made of ahi tuna. And no, it’s nothing like all of these “poke” places popping up in NYC. Those are really just glorified sushi bowls. Real Hawaiian poke is simple and marinated with a few ingredients, which you can eat with some rice or on its own. Alicia’s Market, which was on Bizarre Foods with Andrew Zimmern is a good choice. Another solid option, which you wouldn’t think of, are the local supermarkets, like Foodland. It’s just as good as the poke shops but a little less expensive

This is the mashup you didn’t know you needed. Fresh poke over fried wonton crisps, covered in a special sauce

Maybe it’s because of its close proximity to Japan, but you won’t find a shortage of ramen shops in Hawaii

Noodles, usually served in broth, usually with green onions, fish cake, and/or char siu. It’s very similar to ramen, but it has a chewier texture

No that’s not a typo and yes, it bothers me too. But the term for finely shaved ice flavored with fruity syrups is actually shave ice

Okay, so this isn’t exactly a food but it’s one of the restaurants my sister takes me to every time I visit her in Hawaii, that we love. You’ll see why from the pictures below

Hawaii loves spam. That can be attributed to WWII, when it gained popularity due to its inexpensiveness and long shelf life. Some people cringe at the thought of this canned mystery meat but I always liked it even before visiting Hawaii. And after visiting Hawaii, I never knew just how much you can do with a slice of spam. One popular variation is spam, eggs, and rice for breakfast (cafe from June 2016)

This is a fast food restaurant serving local food, such as plate lunches, bento boxes, musubis; but their most popular item is the chili. According to Wikipedia, Zippy’s is “American, Japanese, Chinese, Okinawan, and Hawaiian fusion”

I’m sure there are some things that I left off this list. But you see, that’s the beauty of food lists. They’re never-ending. That just means you have to go back to the destination and keep on eating!