I tried using the trick of making a beeline for the Harry Potter ride, like I did back in 2015 when I went to Universal Studios to avoid long wait times. But this time, it failed me. I’m not sure if maybe ‘Harry Potter and the Forbidden Journey’ at Islands of Adventure is not as good as ‘Harry Potter and the Escape from Gringotts’ over at Universal, but it definitely didn’t seem as popular. Although to me (a non-Harry Potter fan), I’m not sure why because they seemed like the same ride.

The most popular rides are ‘The Incredible Hulk’, and ‘Skull Island: Reign of Kong’, which is the park’s newest ride, opened in July 2016. If you didn’t purchase a fast pass, expect up to a two hour wait. The worst part about waiting for Reign of Kong was probably having the ride break down right before it was our turn. At that point, we had already waited for half an hour and the employees had no idea if/when it would be fixed. They told us to download their app, which gives you the wait time of all of their attractions in real time, which was actually pretty useful for us for other rides as well. ‘Kong’ ended up being fixed a few hours later, at which point we had to wait over an hour and a half for it.

This was my first time visiting Islands of Adventure. I’ve been to Universal Studios twice (in 2005 and 2015) and I liked Universal ten times better. The attractions were more fun and the wait times weren’t as long. So if you are pressed for time and have to choose between the two, definitely go with Universal. I would say the highlights of Islands of Adventure for me are ‘Jurassic Park River Adventure’ (tip – if you sit in the front row, it’s more thrilling but you’ll also get SOAKED), the Three Broomsticks restaurant over at Harry Potter, and ‘The Amazing Adventures of Spider-Man’ because well, come on – it’s Spider-Man. 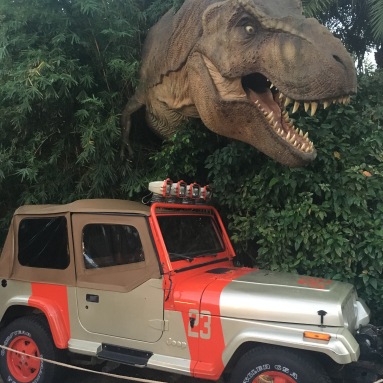