I’ve never been horseback riding before – that is unless you count pony rides on elementary school trips to a farm. And since Ben had never ridden a horse either, we thought it would be the perfect time to try it out. It’s something different, and the horses bring you to Uvero Alto Beach (after a 45-minute drive from Bávaro Beach (aka Punta Cana), where you’ll get sweeping views of the Caribbean coastline. Or so we thought.

It ended up raining on and off the day we booked the tour so it was windy and a bit chilly. Plus, all of the rain in previous days had caused some flooding. There were some areas of the ride that had probably about two feet of water that the horses had to splash through. This did put a damper (no pun intended) on the excursion but overall, it was still a great experience.

Not exactly a beach day

Wrangling cattle on the side of a road 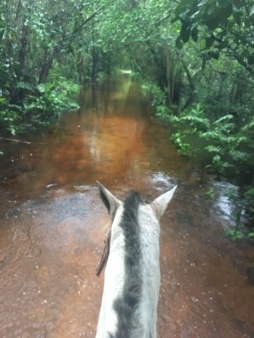 Basillio was a trooper, and trudged through all this water

We booked a two-hour ride for $70 per person through Viator, which then connected us to a local tour group, Rancho Caribeño. If you’re a newbie, don’t worry. A tour guide will be with you the entire time. The horses are pretty well trained for the most part. Ben’s horse, Danillo, seemed pretty calm. My horse, Basillio wasn’t cooperative at times but I think he was just restless. He had no problem running down the beach (upon our tour guide, Oscar’s cue), which was pretty scary at first. I was terrified I was going to lose my grip, fall off, hit my head and get amnesia like Michelle Tanner did on Full House. Thankfully, that didn’t end up happening. The only injury I sustained was a sore butt, which wasn’t too bad.